The story of Mt Whitestone Farms begins in 1930, when our property was purchased by Gary’s grandfather for the purposes of pig farming and dairying.

Gary’s father attempted to expand the business by growing onions and potatoes. However, overly salty groundwater proved problematic and he moved to brassicas, which were known to be more salt tolerant.

There were more challenges to follow as the soil hardened over time and the terrain became more damaged. Large slabs of rock-hard soil were being dragged up during cultivation, and traversing paddocks became increasingly difficult.

Eventually it proved impossible to grow the high standard of produce desired using conventional farming methods. Regardless of the amount of fertiliser applied, crops would fail – the farm was losing money.

Although his father disagreed, Gary decided to try moving forward in a different direction – towards the use of organic farming techniques. He began experimenting with different combinations of natural fertiliser, while reducing the amount of artificial fertiliser and chemicals used.

It felt like some progress was being made but Gary still wasn’t completely satisfied.

Diamondback moth grubs were decimating the brassicas – they had become resistant to all chemical insecticides. Instead of applying double-strength sprays (as suggested by the chemical salesman) Gary began testing natural control methods. He introduced beneficial insects and sprayed Bacillus thuringiensis (Bt, a biological pesticide).

Gary was having limited success with the Bt (cluster caterpillars were devouring the outer leaves of his cauliflowers) so he decided to try spraying chemicals again – the caterpillars retreated into the cauliflower hearts and ate them out! Needless to say, this was the last time Gary used chemicals to try to control insects.

Gary became certified organic with BFA (the Biological Farmers Association) but he felt that there was still something missing. After reading about bio-dynamic farming he thought it sounded like a more holistic and successful method.

Gary contacted Alex Podolinsky (a pioneer of Demeter BD farming in Australia) in the early 1990s, after reading an article about him in the Acres USA Organic Primer. 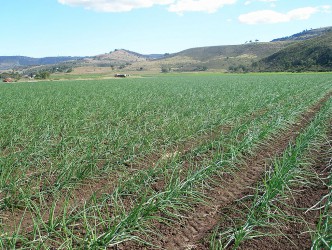 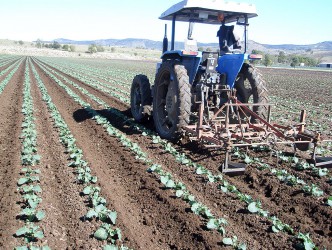 In 1993, after obtaining a stirring machine from another Demeter farmer, Gary started spraying our land with the BD preparation ‘500’. The soil showed improvement but, after a few years, his brassicas began yellowing. During an annual inspection, Alex suggested Gary also apply chemical-free rock dust to provide the trace minerals required by the brassicas, and cow manure to further improve the soil.

After several years of spraying 500 twice a year, and adding supplementary natural inputs as required, we noticed that our soil was becoming softer, easier to work and had a greatly improved structure. The salinity level was also decreasing.

Mt Whitestone Farms was certified to use the Demeter trademark in 1994. We have maintained our registration with the Australian Bio-Dynamic Research Institute (BDRI) every year since then.

We have come a long way since the old days of struggling with hard compacted soil, and our produce is now much in demand for its fantastic taste and healthy properties. 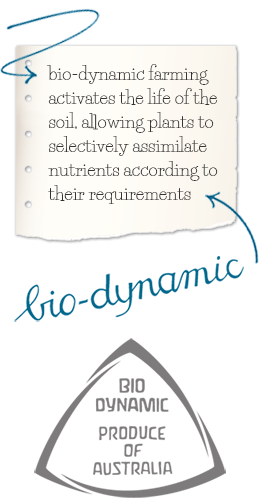